When I was younger, I used to hear about a child being ADHD and think it was just an excuse for the child being hyper and not listening. Boy was I wrong! I never realized until I began working with kids in the schools who had ADHD that it was a legitimate diagnosis. And then after having a child of my own with ADHD, I learned even more about the intensity of the disorder.

Attention-Deficit/Hyperactivity Disorder, are more commonly known as ADHD, is a brain disorder marked by an ongoing pattern of inattention and/or hyperactivity-impulsivity that interferes with functioning or development. But it’s not quite as black-and-white as the definition sounds. For many years, research showed there were clear structural differences in the ADHD brain. The largest review ever of ADHD patient brain scans was carried out at Radboud University Nijmegen Medical Centre and published in 2018. Researchers reported that people with ADHD had smaller brain volume in five subcortical areas, and their total brain size was smaller, too. These differences were greater in children and less in adults. Another interesting finding was that the amygdala and hippocampus are smaller in the brains of people with ADHD. These areas are responsible for emotional processing and impulsivity and had previously not been definitively connected to ADHD. Parts of the ADHD brain mature at a slower pace (approximately one to three years) and never reach the maturity of a person who does not have ADHD.

The brain is a busy communication network where messages are relayed from one neuron (brain cell) to the next. There is a gap between neurons, which is called a synapse. Imagine 2 people talking into an empty, hallow can connected by a string. In order for the message to be passed along, the synapse needs to be filled with a neurotransmitter. Neurotransmitters are chemical messengers, and each one is responsible for different functions. 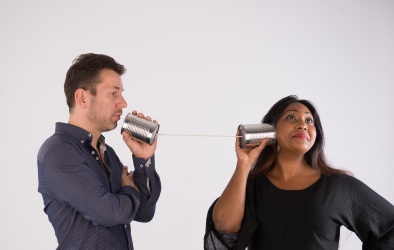 The key neurotransmitters for ADHD are dopamine and noradrenaline. In the ADHD brain, there is dysregulation of the dopamine system. For example, there is either too little dopamine, not enough receptors for it, or the dopamine is not being used efficiently. Stimulant medications help ADHD because they encourage more dopamine to be produced or keep dopamine in the synapses longer. This is why people with ADHD can become calm and relaxed by drinking coffee. 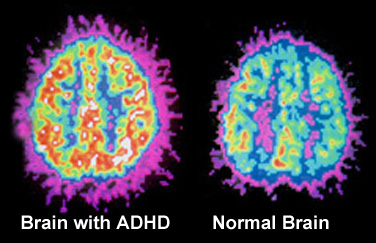 There are variations in blood flow to multiple areas of the brains in people with ADHD compared to people who do not have ADHD, including decreased blood flow to certain prefrontal areas. Decreased blood flow indicates decreased brain activity. The prefrontal area of the brain houses the executive functions and they are responsible for many tasks including planning, organizing, paying attention, remembering, and emotional reactions.

One study published in 2010 found that children with ADHD do not have the same connections between the frontal cortex of the brain and visual processing area. This means that the ADHD brain processes information differently than a neurotypical brain.

So, if you can easily see the difference in an ADHD brain vs a neurotypical brain, then why is ADHD not diagnosed via a brain scan? Well, as Dr. Thomas E. Brown explains in his book, “A New Understanding of ADHD in Children and Adults: Executive Function Impairments,” tests such as PET and fMRI scans give an insight into how the brain is functioning at the moment the test was performed. Like a photo, they capture one moment in time. However, they do not take into account how the brain operates in different situations, in the way a clinical test can during a detailed interview.

There is no objective test to diagnose ADHD. Instead, a detailed evaluation is carried out by a clinician. It includes an in-depth interview with the patient, a review of school reports and medical history, and possibly tests to measure attention, distractibility, and memory. With that information, the clinician can determine if the diagnostic guideline for ADHD set by the Diagnostic and Statistical Manual of Mental Disorders (DSM) is met.

Now in it’s fith edition and known as the DSM-5 (this is the first edition that does not use a Roman numeral), the publication doesn’t offer treatment or medication advice for the 157 disorders described in it’s pages. Instead, it was designed to help healthcare professionals better identify and diagnose mental disorders that impact personality, cognitive functioning, mood, and identity. The manual also provides uniform diagnostic codes for each issue which are used for medical billing and data collection. Without the proper coding listed in the DSM-5, US health insurance companies will not cover treatments and/or medication costs.

The DSM-5 is primarily used in the USA where as most of the rest of the world turns to the World Health Organization’s (WHO) International Classification of Disease (ICD) which covers all diseases, not just those that are phychiatric in nature. American Psychological Association (APA) encourages healthcare professionals to consider DSM-5 and ICD as, “companion publications,” designed to be compatible with each other.

I recently did a course on International Open Academy on ADHD (thank you Groupon) and learned that there are gender specifications of how ADHD presents itself. According to the APA in 2013, 5% of school-aged children are affected by ADHD and the ration from boys vs girls is 2:1. Historically, ADHD was thought to be a disorder that mostly affected boys since boys tend to be diagnosed at a much higher rate. Checklists, rating scales and treatment protocols tend to focus on the typical male presentation of ADHD. Research suggests that ADHD may occur almost as frequently in girls as in boys but may be underdiagnosed in girls. The discrepancy in diagnosis is thought to be due in part to the way the symptoms manifest in girls and biases in perception and referral. Boys tend to display symptoms of hyperactivity/impulsivity, the kinds of behaviors that draw attention. Girls are much more likely to present with inattentiveness/forgetfulness and be seen as more distracted or day dreamers.

Even girls with ADHD-hyperactive type tend to display less physical energy than boys. Girls are more likely to display behaviors such as chewing on their clothes or hair, being overly talkative or being more emotionally reactive. Girls also tend to try and cope with their symptoms by immersing themselves in tasks that they can do well. This outward appearance of success can be deceiving and mask problem behaviors. As a result, their struggles don’t immediately garner attention.

Unfortunatly, due to the way ADHD symptoms are presented in girls, they are often time misdiagnosed and 3 times more likely to have been previously treated with antidepressants and were reported as having difficulty with school work and having a strenuous relationship with their parents.

Structure means establishing and maintaining a daily routine. Knowing what is coming up helps to keep anxiety in check and creates consistency. Establish simple routines for mealtimes, playtime, homework, bedtime, etc. Give your child specific tasks such as setting the table or laying out her clothes for the next day.

Have a Set Bedtime

Sleep is sometimes difficult for children with ADHD. Poor sleep can exacerbate their symptoms. Establish an evening bedtime ritual such as a bath or story and a firm ‘lights out’ time.

Children with ADHD can easily become overwhelmed with too many instructions or tasks. Be specific in what you say. Break instructions or information down into smaller pieces. Instead of saying, “Go brush your teeth, put your shoes on, grab your book bag and meet me at the door”, you may have to break the steps down to one or two at a time.

Consider using a big, colorful calendar, cute checklists or behavior charts to help your child remember to do things. Even young children can benefit from visual cues such as pictures or symbols.

Children with ADHD are often quite distractible. Create quiet spaces for homework, reading or just relaxing. Ideally, this is an electronics-free zone as electronics can overstimulate and exacerbate impulsivity.

Learning to control impulses is a key skill for some children with ADHD. Children’s games such as pick-up-sticks, Simon Says, Red Light-Green Light, and Jenga rely on those skills to be successful. Do homework with your child. Ask questions that require a thoughtful response.

Help Your Child Be Organized

Organization is key for children with ADHD. Use a homework planner. Pack her book bag together the night before. Have a designated pace for homework and establish a routine for picking up and putting away personal belongings.

Learn effective behavior management strategies. Ideally, you want to encourage positive behaviors. Reward with praise such as “I like how you put your books away when you finished.” Sometimes your child will break the rules. Be flexible but consistent in holding them accountable. Mistakes are often perfect teachable moments.

If your child has the diagnosis of ADHD, they have the right to be on a 504 Plan and accommodations in the school. Examples of some accommodations for a child with ADHD would be to sit at the front of the class, space between the child’s desk and the desks of the other students, written daily schedule or picture schedule, extra set of textbooks to keep at home, and breaking lessons down into sections, etc.

Knowing how to best help your child succeed in the classroom and at home will help them be able to become a successful adult. Adults who struggle with ADHD who were not properly guided or went undiagnosed as a child will struggle with a multitude of challenges. These challenges are, but not limited to:

If you suspect your child may struggle with ADHD, bring your concerns to their doctor and request a DSM-5 be done. If your child does indeed have ADHD, help them learn essential life skills to become the best and most successful version of themselves that they can be. It will also require a little extra patience on your end as they find their new normal.

I'm a mom of 2 young boys. My oldest has ADHD and high functioning Autism. I am here to share my story, encourage others, and pretend I know what the hell I'm talking about. Also, I'm sarcastic AF. View all posts by amenle89